THE WEEK THAT WAS

It's a strange record to hold, and I'm not even sure how to track it's impressiveness... but not only has Jonathan Osborne won the final week of this season -- his 7th of his career -- but he's won the final week of  the past two seasons as well... as well as Week 12 (final week) of DFC IX in 2008.  It's quite a rebound of from his 1 game win several weeks ago, enough to toss him right into the postseason.

Though his worst season, and tied for lowest amount of wins in a season at 37, Drew Warren takes 2nd for the week at 7-2 -- to be fair though, Josh Crosby won 37 games in 12 weeks in DFC IV, while Drew likely would have hit 48 if given another 3 weeks.  Drew // Morris gets 3rd for the week, and Mark "The Mighty" Gainey takes 4th, both at 7-2.

Because of the strange year we've had, we instituted the "Top 12 Records" rule this year -- top 12 get in, regardless of division or conference -- but your division title would grant you the higher seed, regardless of TBA.  We also ran the risk of having a division champion not make the postseason because of record not being in the Top 12 (we're not the NFL... we 're not having a 5-11 division champ make the playoffs at the expense of a much better team).

And this year, DMO gets the honor of winning a division and missing the postseason in what can only be billed as the NFC East of the DFC.  Congrats! 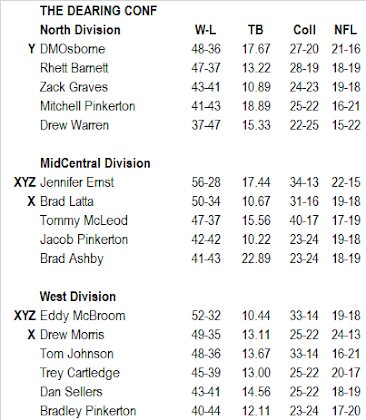 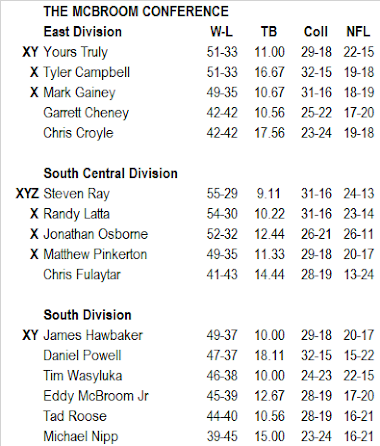 GAME SCORES
Nebraska 30, Penn State 23
Illinois 23, Rutgers 20
West Virginia 24, TCU 6
Virginia 31, Louisville 17
Colorado 35, Stanford 32
Ole Miss 59, South Carolina 42
Detroit Lions 30, Dub F-T 27
New York Football Giants 27, Philadelphia Eagles 17
Arizona Cardinals 32, Buffalo Bills 30
LA Rams 23, Seattle Seahawks 16
THE WEEK THAT WAS
Seems like the season for "It's been a while since..." but we have another "It's been a while since this a weekly win for...".  This time, original DFC'er and one of the top all timers, Jennifer Ernst takes her 7th weekly win, and her first since Week Three of DFC XVII in 2016., this time with a 9-1 record.
Grandy Latta gets 2nd place, nailing the TB score and going 8-2. Tim Wasyluka seems destined for another TBA Crown this year, coming close again, and getting 3rd for the week, while Jonathan Osborne continues to rebound from his disastrous 1-9 a few weeks ago, taking 4th. The final 8-2 record of the week belongs to Tyler "New Dad" Campbell, who gets 5th for the week.
Coming in 6th is Steven Ray at 6-4, James Hawbaker in 7th, Tom Johnson in 8th, and in a rarity, the McBroom boys tie for 9th.
Rounding out the Top 12, a three-way tie for 11 with Brad Latta, Drew Morris, and Matty Pinky, all at 5-5.
Also Finishing:
5-5: DMO... Daniel Powell.... Tad Roose... Tommy McLeod... Yours Truly... Bradley Pinkerton... Drew Warren...
4-6: Brad Ashby... Zack Graves... Mitchell Pinkerton... Garrett Cheney
3-7: Jacob Pinkerton... Mark Gainey... Chris Fulaytar.. Mikey Nipp... Trey Cartledge... Dan Sellers... Chris Croyle...
2-8: Rhett Barnett 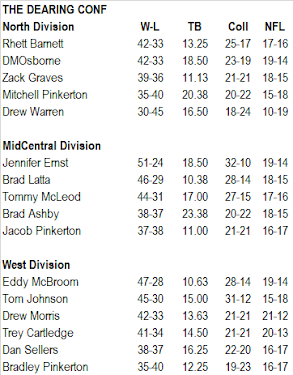 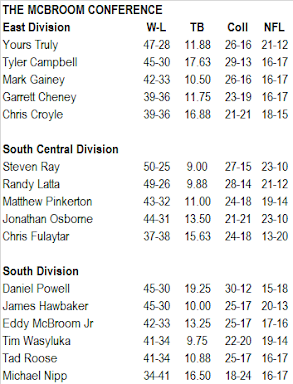 WEEK NINE, the Final Week of the this slightly shortened DFC Season. Remember once you submit your picks, they cannot be changed. If there is a game cancellation or postponement, the game will just be tossed.

Six college games, four NFL, including some teams we don't usually pick because 2020 why not. 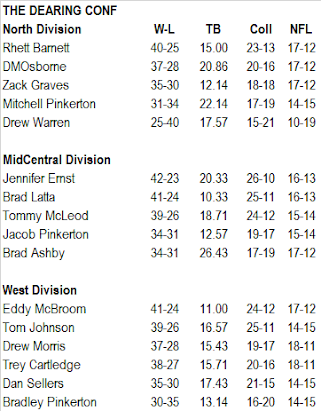 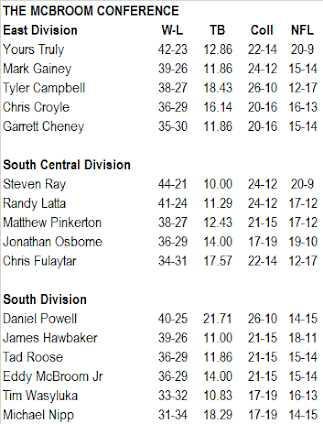 THE DFC TOP TWELVE (based on record) 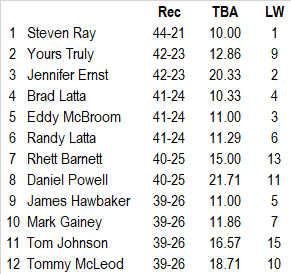 NOTE: Watching the increase of games being cancelled due to COVID issues, and the fact there is no way we'll get to the desired 96 games, the DFC regular season will end after week nine -- so we have this week and next week, and the postseason will begin. This will give us one extra week to make sure we get a full and proper playoffs so when I... I mean, so when someone wins, it won't have to be with a partial postseason.

THE WEEK THAT WAS

Congrats to another member of our 10 Week Winner Club!  Big Tim Wasyluka gets his 10th career win of his career, and the first since DFC XVI in 2015 -- this week he takes it at 7-2, and nails the TB score with a big ZERO.  Congrats to him... I dont have the numbers in front of me, but I know its been a long while since someone did the double take on a weekly win. 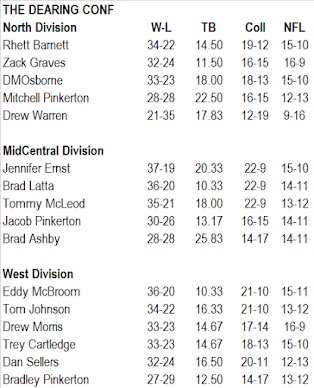 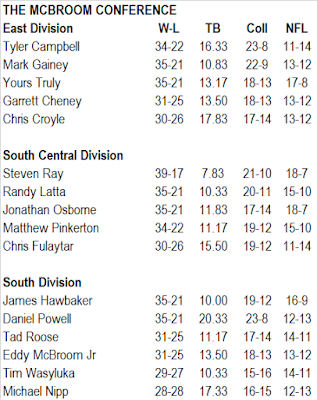 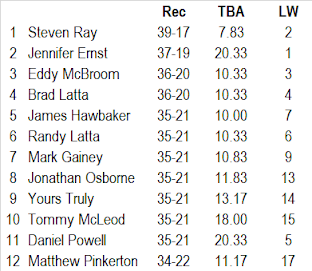 IF THE PLAYOFFS STARTED TODAY

Week Seven of the DFC XXI Rolls On!  With the return of MACtion and Pac 12, plus the B1G tryin play with whoever they don't have on a 300 day quarantine, a load of compelling games to pick from (and no Clemson/ND because nearly everyone would go ND)